Who is my enemy? 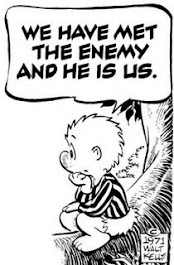 I've been wanting to say something about the appalling state of American politics. It seems to me that the most urgent issue in U.S. governance is not this party's policies or that party's policies, not what the last president did or what the new one is going to do. The most urgent issue facing us is our polarization, and I don't mean the dysfunctional Congress -- I mean the great gulf running between us, the voters. And I don't mean out there, I mean right here in my mirror, because I am as firmly pro-this side and as firmly disgusted by that side as anybody else.

Every four years, we're all faced with the absolutely stunning evidence that roughly half the electorate is stupid, crazy, and apparently just downright evil. Each half thinks that same thing about the other half, right? The Democrats were so horrified when Trump won in 2016, the website for Canada's immigration administration crashed with all the people who would rather leave America than call him their president. Trump himself, as well as many of his supporters, were so stunned by his loss in 2020 that they couldn't bring themselves to believe it, so we saw that violent attack on Congress to try to prevent the results from being certified.

It's not just that we hold divergent views, it's that we are each so wrapped up in our own side's conversation that we are completely out of touch with each other, we do not hear each other at all. We can't believe that any sane or decent American could possibly vote that way. But here's the thing: half the electorate is not a "lunatic fringe." A third, or a quarter, of the electorate could not fairly be described as a lunatic fringe. Right? And I'm not talking to you, so much as I'm talking to me, because I think they must all be stupid, crazy, or downright evil. And if it was some fringe, I might let myself get away with that -- but it's not. It's half the damn country. I can't stand it, but in honesty I have to respect that.

That other half of the country, my neighbors, my brothers and sisters in democracy, deserve me to listen to them respectfully. The integrity of my country's democracy, peace and stability, demands that I listen to them respectfully. But I don't think that means listening to their favorite media outlets, as people sometimes suggest. The media on both sides seems designed to divide us, not to inform us. I don't want rhetoric, my side's or your side's. I want to understand how that rhetoric resonates with you, what those buzz-words mean to you, what my side's buzz-words convey to you, how we can read or hear the same words and come away with such mutual incomprehension.

And in order to understand the other side, I have to do that work on myself, as well. I need to examine my own assumptions. I need to notice my own reaction to this slogan or that, pay attention when I'm triggered pro or con, and take that as a signal that I might be being played by either my own side or the other side, that I need to look deeper. And here's the thing: my neighbors over there on the other side of that invisible gulf are never going to listen to me, or allow me to question them, until they are convinced that I am open to the same kind of challenge.

I want to find a space, or create a space, or be a space, where we can leave our party loyalty at the door and look slowly, deeply, respectfully, thoughtfully at the really big questions confronting us now. What would a healthy economy look like? How might we or should we respond to high immigration pressure, especially at our southern border? What about economic inequality, within the U.S. and globally? How are we ever going to recover from the overwhelming global shock of the pandemic? How do we balance protection of the most vulnerable among us with individual freedom of conscience? What do we need to do, what can we do, to head off environmental catastrophe? Etc....

I've been trying and failing, to my dismay, to find some non-profit to support that is actively working to bring down the fever of antagonism between the American left and right. There are some -- here's a list -- but they're all pretty much tiny, marginal efforts. That said, I gave a portion of this month's charitable pittance (not all, basic human needs are still the priority) to Crossing Party Lines. I would be very grateful if anyone reading this would make other suggestions in the comments.

I am tired of the cognitive dissonance between feeling like only a lunatic fringe could ever think and vote like those people on the other side, and the fact that they make up about half the country, way more than a fringe. I'm tired of hearing both sides so sure that the wrongness of the other side is the problem. I'm tired of feeling that way myself about the other side, when surely, the mutual antagonism is at a level now where it's a bigger problem for our democracy. I'm tired of being part of this problem, and the only solution I can see is engagement.

I've said before in this blog, I think the most fundamental monastic virtue is humility. May God grant us all the humility to engage in loving dialogue, to question and be questioned in integrity and charity. Amen.

Felicity
I am a Roman Catholic lay hermitess and a Benedictine Oblate. I have taken vows of Solitude, Silence, and Simplicity, and the name Felicity because it means "happiness." I'm starting this blog during the COVID-19 crisis, to offer hope and solidarity to those who are finding themselves isolated involuntarily by the social distancing protocol. Peace be with you all.