O Death, where is thy Sting? 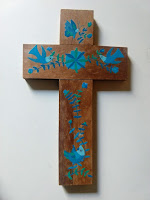 When I was 18 years old, a friend of mine died. This was one of the most significant incidents in my life, before or since. Or rather, not his death itself, but the "parting of the veil" that I was given some three months later, when I returned home from my freshman year of college and found out about his death. I wish I could tell you how it was. I don't remember anything about it, really, other than the message. I'm sure it was not a sleeping dream, but a waking "vision", or rather a "knowing". And it was totally convincing, deeply moving, life-changing. And this was it, all of it: Wilson, my friend, was at peace. He understood everything, everything made sense, and everything was OK. Does "OK" sound underwhelming? But really, it's profound. EVERYTHING is OK. Everything makes sense, from the other side, and everything is fine.

I promise to post separately, soon, a short account of my history of depression, PTSD, healing and faith. I'll come back and edit this with a link to that post. Meanwhile, I'll just say that at age 18, I was a complete basket case. And while I was not close to Wilson, I felt a kinship with him. I felt that he, too, was crazy.  Unhappily crazy. Confused, like me. Nothing made sense to me, or to Wilson. And Wilson died drunk, breaking the law. He and a friend (I wish I knew what became of Tomás) got drunk one night and climbed the locked fence to a local swimming pool. Wilson drowned. Was he in a state of grace? Man, how could he have been, by any kind of conventional understanding of that phrase? He was drunk, totally trashed, not even in any state to think, to discern ... how could a young man in that state of mind make any kind of a meaningful act of faith or contrition?

Death is not a problem. Pain is not bad. Suffering is not wrong. Christ Himself suffered, and died, on the cross, so how can it be wrong? This is a paradox, and I cannot begin to explain it, but I feel it deeply to be true. I don't like pain and fear and suffering, I don't want it, and I will duck if you take a swing at me ... but suffering and death are not, somehow, somewhere deep within the mystery, inherently wrong. I hesitate even to post this, because it's one thing to say that my own suffering has been redemptive, but how many people will feel that I am dismissing their pain? But it's not even what I mean. I don't mean, "I'm stronger where I was broken." I don't mean, as the Easter Vigil liturgy says, "oh happy fault of Adam, that merited such a wonderful Redeemer." I mean that pain, death, and even sin, are not flaws in God's world -- the world of our totally loving God -- at all.

I just don't have the words. Far more eloquent was the 14th-century anchoress Julian of Norwich, who wrote in her Revelations of Divine Love, that God told her: "all shall be well, and all shall be well, and all manner of things shall be well." Her world was outwardly even less well than our COVID-shocked world of 2020. In her lifetime, Norwich lost perhaps 1/3 of its population to the Black Death, and on top of that were repeated severe famines. Julian's series of visions, or "shewings", came when she herself lay on what she and everyone around her believed would be her own deathbed. England was at a Hundred Years' War with France, with all the killing, and all the crippling taxation and conscription, that that suggests. There were two feuding Popes. Still one Church -- no Martin Luther yet, and no John Calvin, but people were burned at the stake for reading the Bible in English, or for cross-dressing (not cross-gender - or not only - but cross-social class). And yet, the dependence of the populace on the Church was shaken, and not only by its inability to influence God to halt the disasters. Since priests attended the dying, they died in even greater proportions than the general population, and so increasing numbers of people died unshriven; i.e., without the last religious rites that would ease the way into Heaven. That was terrible to a 14th-century mind in a way that we moderns, again plague-deprived of the sacraments, cannot easily imagine. The rich could pay for Masses and prayers to ease their sinful souls through Purgatory, but there was no such hope for the common people. The foundations of religious and secular authority alike were rocked. The Plague had so decimated the population, in Norwich and all across Europe, that the whole dysfunctional system of feudalism and serfdom was thrown into chaos. Peasant uprisings challenged, and were violently put down by, the equally shaken upper classes. There was no such thing as "germ theory," of course, but never a shortage of conspiracy theories, fueling another whole subset of violence, especially against Jewish people. It was a terrible, terrible, terrible time.

This is the paradox, the paradox of the Incarnation and of the Crucifixion and of the Resurrection. Julian saw paradox, that sin is terrible, and yet that sin is not a thing. This is not a faith of "if you behave yourselves like good little boys and girls, you will get into Heaven, but if you mess up you're going to Hell!" Listen to what St. Paul says to the Corinthians (1 Cor. 15:55-57): "O death, where is thy sting? O grave, where is thy victory? The sting of death is sin; and the strength of sin is the law. But thanks be to God, which giveth us the victory through our Lord Jesus Christ."

Do I need to unpack that? "The sting of death is sin" -- nothing too unusual here ... but then, "and the strength of sin is the law."  And what does that mean? No, I'm not going to turn this blog post into a book-length manuscript ... I'm just going to invite you to meditate on these verses, slowly, as if you had never heard them before. "But thanks be to God, which giveth us the victory through our Lord Jesus Christ."  The Lord of Love.

And to frame this, a final quote from Mother Julian:

Felicity
I am a Roman Catholic lay hermitess and a Benedictine Oblate. I have taken vows of Solitude, Silence, and Simplicity, and the name Felicity because it means "happiness." I moved to Spain in February, 2022, and am focusing on discerning what the next phase of my vocation is going to look like. Peace